A capacity development workshop on “Open Data Policies, Practices, and Cases” was held in Bishkek on 1 – 2 December where more than 60 representatives of the authorized bodies of the countries of Central Asia and the Caucasus explored best practices in open data policy frameworks and successful cases of such countries as the Republic of Korea, Canada, Estonia, and the countries of the European Union.

At the opening ceremony, the Deputy Minister of Digital Development of the Kyrgyz Republic Ms. Indira Sharshenova noted that “every year, a significant part of budgetary funds is spent on the formation and utilisation of of state information resources, as information otherwise becomes gradually obsolete and loses its value. Being published in a timely manner, information can serve the society, turning into a valuable material for the economy, science and technology, form the basis for the creation of new services, and serve as the basis for making reasonable life choices for citizens”. “In addition to developing our own country plans, it is important to actively switch to integration of data in order to create our own niche in global digital processes. Strength is in unity” - emphasized Ms. Sharshenova.

The Director of the Integrated Data Analysis Centre under the Ministry of the Interior and Safety (MOIS) of the Republic of Korea Mr. Chul Kim noted that “the international community is currently facing many challenges, such as climate change, crisis, and socio-economic inequality. Against this background, open data is a key element of the digital economy, and it is an indispensable resource to wisely overcome the numerous challenges facing us”.

The Project Manager Mr. Bakyt Zhexembay speaking on behalf of Mr. Alikhan Baimenov, Chairman of the Steering Committee, emphasised that “the pandemic has become an accelerator for the widespread application of new technologies and for improving the quality and pace of public service delivery across the globe”. “In this context, and in light of recent developments in digital government, it has become more important to ensure greater openness and access to data. In making government data open and widely available it is crucial to follow such principles as data reliability, consistency, and timeliness, as well as to avoid any discrimination, thereby guaranteeing the observance of the rights and freedoms of citizens. With greater openness in government data, public institutions become more transparent and accountable to citizens, that could ultimately increase public trust, which is not only social capital, but also effective administrative capital”.

In addition, the UNDP Deputy Resident Representative in Kyrgyzstan Ms. Monica Rizal and Director of the State Agency for Civil Service and Local Self-Government Affairs under the Cabinet of Ministers of the Kyrgyz Republic Mr. Elchibek Dzhantaev underlined that the open data policies play crucial role in increasing transparency and enhancing citizens’ rights to public access to information, as well as increasing the participation, interaction, self-empowerment, and social inclusion of citizens. 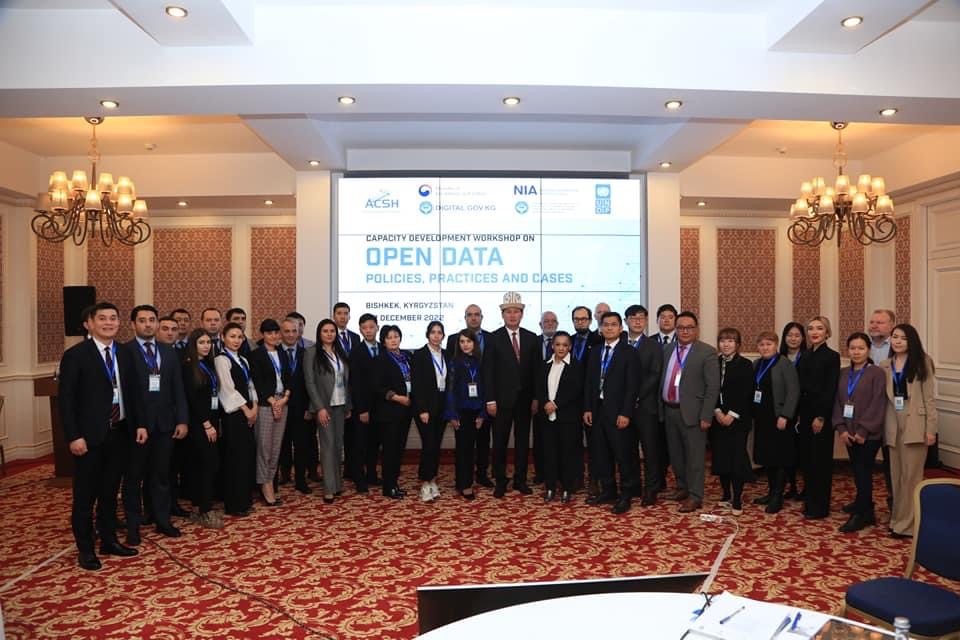 During the workshop, international experts of the Republic of Korea and KPMG Baltics presented the open data policy frameworks, challenges in implementation, and successful examples of release and utilisation of open data including the creation of portals, the risks and opportunities of open data, as well as legislative aspects.

The participants also had an opportunity to interact, discuss and analyse challenges and issues as well as get recommendations for effective policy development and implementation. As part of the event, the participants also visited authorized state bodies of the Kyrgyz Republic and studied innovative projects in the field of digitalization.

The two-day seminar was organized by the Astana Civil Service Hub (ACSH), UNDP in Kazakhstan, the Ministry of the Internal and Safety (MOIS), the National Information Society Agency (NIA) of the Republic of Korea, the Ministry of Digital Development of the Kyrgyz Republic and the State Agency for Civil Service and Local Self-Government under the Cabinet of Ministers of the Kyrgyz Republic and with the support of the UNDP in Kyrgyzstan.

This event was part of the regional project jointly implemented by UNDP Kazakhstan and the Astana Civil Service Hub on one hand, and the MOIS and NIA on the other, aimed at increasing the capacity of civil servants and practitioners involved in the implementation of innovations in the system of public administration and digitalization of public services in seven countries of Central Asia (Kazakhstan, Kyrgyzstan, Tajikistan and Uzbekistan) and the Caucasus (Armenia, Azerbaijan, Georgia). The project runs for three years (2021-2023) and includes capacity building workshops and seminars, and the development of relevant knowledge products, as well as study visits to the Republic of Korea.