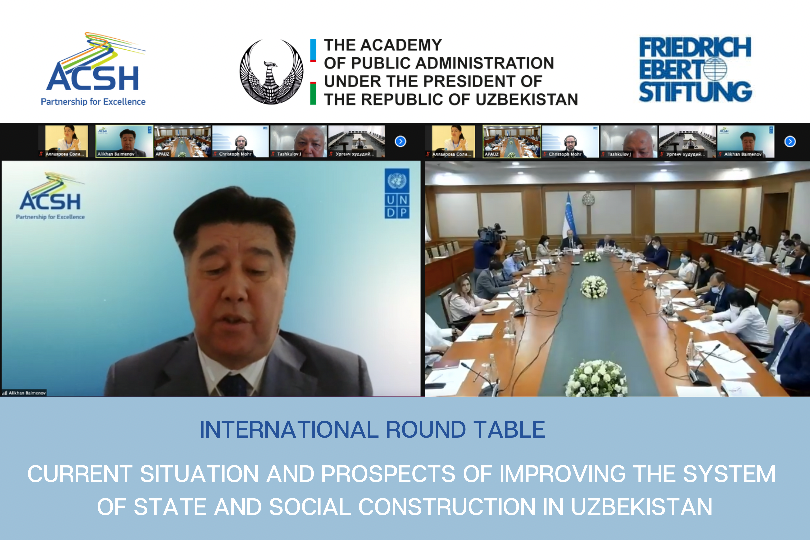 On July 30, 2021, an online round table on the topic "Current situation and prospects of improving the system of state and social construction in Uzbekistan" was held in Tashkent. The event was organized by the Academy of Public Administration under the President of the Republic of Uzbekistan jointly with the Astana Civil Service Hub and the Friedrich Ebert Foundation in Kazakhstan and Uzbekistan.

Opening the round table, Mr. Adham Bekmuradov said that in recent years Uzbekistan has achieved very tangible results in organizing large-scale reforms by introducing an innovative and efficiently functioning system of state and public construction.

In his speech, Mr. Akmal Saidov noted that the Strategy for Action in the Five Priority Areas of the Republic of Uzbekistan is a kind of national strategy for the implementation of the Sustainable Development Goals. At the same time, he believes that the country made  progress in foreign policy and ensuring human rights. “The state has begun to listen to the people and to solve many problems that have accumulated over the years. ... At the same time, the attitude of society towards the state is changing, people are becoming more socially responsible”, he said.

The achievements of Uzbekistan in the field of reforming the system of public administration, human rights and the revitalization of civil society were noted by other speakers of the event, who also shared the international experience.

In turn, the Chairman of the Steering Committee of the Astana Civil Service Hub, Mr. Alikhan Baimenov noted that Uzbekistan is one of the active countries participating in the Hub. He further highlighted the factors affecting the quality of public administration and the implementation of comprehensive strategies that follow from the analysis of international experience. He drew particular attention to the importance of ensuring the integrity of the strategic and budgetary planning system; clarity of interinstitutional relationships; optimization of information flows; simplification of business processes within the state apparatus and processes for the provision of public services; involving the public and ensuring civic participation.

During the discussion, the participants of the event asked the speakers questions, discussed ways and directions for further improving the system of public administration and public construction.