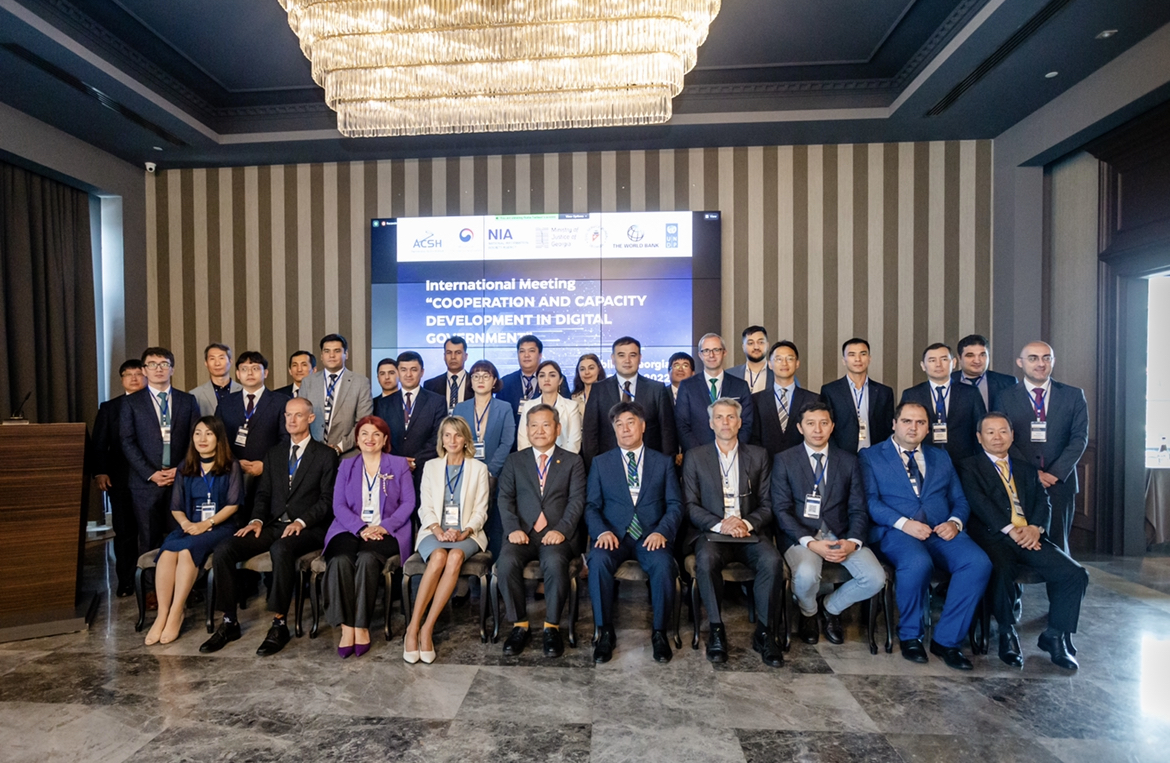 More than 80 representatives of the authorized bodies of 7 countries of Central Asia, the Caucasus and the Republic of Korea studied innovative technologies in the public administration during the international meeting "Cooperation and Capacity Development in Digital Government" in Tbilisi.

The two-day event on innovation began with welcoming speeches of the Chairman of the Steering Committee of the Astana Civil Service Hub Mr. Alikhan Baimenov, the First Deputy Minister of Justice of Georgia Ms. Tamar Tkeshelashvili, the Minister of the Interior and Safety of the Republic of Korea Mr. Sang-min Lee.

Speaking about the joint project between the ACSH, UNDP and the Government of the Republic of Korea, Minister Sang-min Lee emphasized that “COVID-19 has created a lot of difficulties in international cooperation. But, strenuous efforts, made by the UNDP and the ACSH lead to uninterrupted implementation of the project, and made today’s event possible”. He also noted that exploring best practices in the field of digitalization and the application of whole of government approaches in the public sector play an important role in building the government as a digital platform, as well as in breaking down barriers between government institutions and providing quality services to citizens".

In his welcoming speech, Mr. Alikhan Baimenov noted that "the new reality we live in today have put governments around the world under immense pressure, placing new demands on the quality of public administration. Among the many factors that determine the resilience and effectiveness of public administration, two aspects can be distinguished. First, it is the application of modern technologies, innovation, and digitalization. Second, it is the development and implementation of a whole-of-government approach”. He also emphasized that the topic of today's event not only combines these two areas, but also confirms that a whole-of-government approach is required for the successful implementation of digitalisation initiatives.

In addition, the UNDP Resident Representative in Georgia Mr. Nick Beresford and the Regional Director for the South Caucasus Sebastian of the World Bank Mr. Sebastian Molineus delivered their welcoming remarks.

Best practices in the field of digitalization were presented by leading experts from Georgia, the Republic of Korea and the World Bank.

Representatives of Georgia and Korea spoke about successfully implemented initiatives in the digitalization of governance and public services in their countries. The most critical factors that need to be taken into consideration for ensuring successful digital transformation processes were discussed using the experience of Korea as an example.

Experts from the GovTech team of the World Bank shared experience in utilising whole-of-government approaches in digitalization, and also talked about how to increase interoperability between government agencies at different levels and build effective data-driven governance.

On the second day of the event, the Government of Georgia arranged study visits to the Digital Governance Agency, Techno Park and Public Service Hall, where innovative projects, solutions, and technologies in the field of public administration and public services were presented.

This event was organized as part of a joint project of the UNDP, ACSH, MOIS and NIA aimed at increasing the capacity of civil servants and practitioners involved in the implementation of innovations in the public administration system and digitalization of public services in seven countries of Central Asia (Kazakhstan, Kyrgyzstan, Tajikistan and Uzbekistan) and the Caucasus (Azerbaijan, Armenia, Georgia). The project is designed for three years (2021-2023) and includes research, seminars, conferences, as well as study visits to the Republic of Korea.